The maritime sector is a key factor for modern society. This sector plays a key role regarding the social & economic development and it is a potential source of excellent employment & career opportunities for the millions of people currently working in maritime-related activities and companies around the world.

The maritime industry includes the provision of goods and services in the maritime sector, shipyards, shipbuilding, ports, infrastructure, logistics and tourism. According to Koncept Analytics statistics, maritime transport is the dominant branch of the transport sector in terms of size.

The study program Navigation and Maritime and River Transport is addressed to those who want to pursue a career in the maritime and port field or in related sectors.

The program has a duration of 4 years and it is designed to provide graduates with specific and specialized engineering skills, corresponding to the requirements of the international maritime economy. Graduates will thus acquire the level of scientific, engineering and managerial knowledge but also the practical skills appropriate to the current and future needs of the shipping industry, respectively the river, sea and offshore shipbuilding industry.

WHAT WILL YOU STUDY

The interdisciplinary curriculum is aligned with the international standards, STCW (Standards of Training, Certification and Watchkeeping), based on the IMO (International Maritime Organization) model course 7.03 and is certified by ANR (RNA) (Romanian Naval Authority) to contribute to providing the technical and managerial skills for a successful career.

The engineering degree and the officer’s certificate are internationally recognized, giving you the opportunity to be hired anywhere around the world.

If during your university studies you carry out your internship on board the ship, we offer you the opportunity to study online on the virtual campus. You will benefit from an open session and you can reschedule and take the exams when you return to the country.

Many of our students choose to study a semester at one of the partner faculties, benefiting from the ERASMUS scholarship.

All our graduates can choose between a career at sea or on shore.

The ICT field is gaining more and more ground and the maritime sector is keeping up with this trend. You will work on the most modern navigation simulators.

More than 20 crewing companies signed partnerships with the university, giving students the chance to do their internship within multicultural crews. More than 150 students go on a voyage every year

The first year of faculty will provide the perfect setting for you to learn the sailing skills of manoeuvring sailing boats on the shores of Lake Siutghiol (Headquarters of the Nautical Base of the university).

Graduates of the Navigation and Maritime and River Transport study program may hold the positions of Officer, Chief Officer, Captain or various other positions in the maritime industry, including: 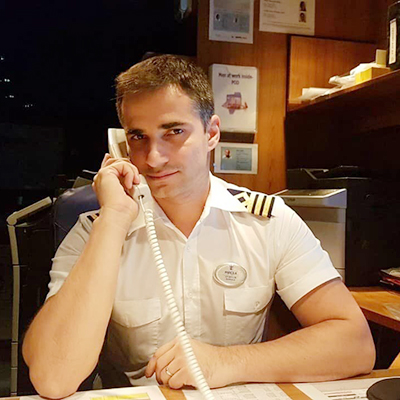 Chief Officer, Allure of the Seas

I graduated from CMU in 2006 and, upon completion of my cadetship period, I got a contract as 3rd officer on a container ship. Then, I had the chance to work on passenger ships. I started with Norwegian Cruise Line NCL, where I came to better understand what such a working environment and inter-departmental relations really mean. After one voyage as 2nd officer with NCL, I managed to join the Royal Caribbean Team, and I am still with them, after more than 10 years.

It hasn’t been easy because Romanians didn’t frequently work on passenger ships. I was the first Romanian officer to work with NCL and among the first with Royal Caribbean. I learned some beautiful lessons, some of them easier, some of them more difficult … but, most importantly, I learned that patience and a good cooperation with your peers and superiors are the key to success! Slowly but surely I was promoted and now I finally am Chief Officer Safety, which means I get to work with all departments, I provide training for all 860 crew members and I am responsible with onboard safety. 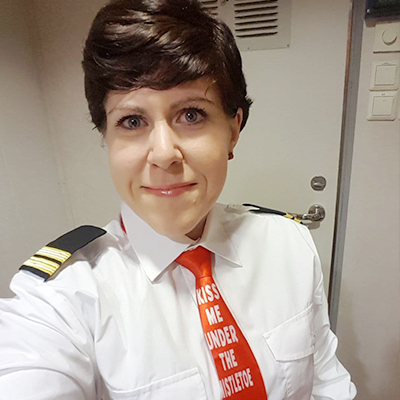 After graduating the Faculty of Navigation, I started my cadetship with Maersk Tankers, as 3rd and 2nd officer. I continued to work for Maersk Tankers, as 3rd and 2nd officer, on chemical and oil tankers until 2018, when I decided to pursue a career onshore. I worked as Vessel Operator, for the merchant marine, for the chemical tanks of Ace Tankers in Amsterdam and I recently started on a new path, namely I started working as Assistant Marine Superintendent for K Line LNG UK in London.

Personally, I have always wanted to travel and see the world, and pursuing an officer career turned out to be the best decision in that respect. Although there have been obstacles along the way, such as being a woman in a male-dominated field, I managed to break through and fulfil my dream. Although the financial aspect represents a big plus, it is equally important to find some other attraction points. In order to succeed in this field one needs passion and I recommend to all current and future students to also see the positive aspects of sailing and to enjoy every sunrise and every sunset at sea. 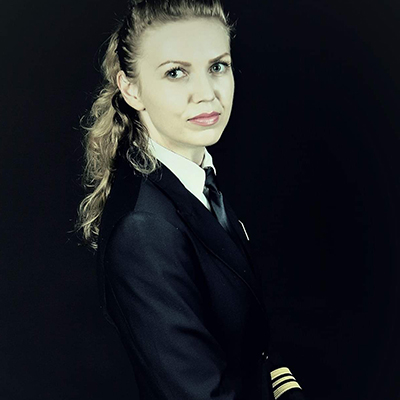 I graduated from CMU in 2012 and, starting with 2014, I work on passenger ships. I started out as 3rd officer in 2014, 2nd officer in 2015 and 1st officer in 2016. Since January 2019 I am Chief Officer Deck. The beginning is never easy, but the strength and the experiences accumulate over time. The most important thing is to have a good foundation. If the foundation is shaky, nothing strong could ever be built on it, but is it is solid enough, the sky is the limit. My most sincere thanks go to my professors who, during the four years of studies, have helped me build a solid foundation.

If I could change something from my study years? I would read more books and “bother” my professors with more questions (I’m sure they wouldn’t mind). When you’re a student things are easy: you attend the lecture and them sit for the exam, but on the job thing are different: first you get tested, then you learn!

In 2009, when I was a IIIrd year student at the Faculty of Navigation and Naval Transport, I carried out my onboard training on an oil tank. Upon graduation, starting with 2011, I worked as 3rd officer until 2015, when I had the opportunity to get promoted as oil tanker Chief Officer. Since 2017 I am captain on an offshore F.C.B. type of vessel, specialised in crew transfer and towage, for a Swiss company named Offshore Angola.

I am grateful that God guided my steps towards CMU, where I met wonderful colleagues, 100% dedicated professors who got involved in my academic and professional growth! I highly recommend the Faculty of Navigation and Naval Transport – Navigation major – not just because it is what is called a “lucrative job”, but also in order to build a career of a lifetime and benefit from multiple opportunities.

And YES – I succeeded in my professional, social and personal life also because of Constanta Maritime University. If you have strong will and belief, you can make it! Good luck to all CMU students!

We are in the third year of organizing online registration using a 128-bit SSL encryption system.

During enrolment period every Monday afternoon between 17.00-18.00 we organize online meetings with our students and graduates. If you want to find out not only the latest news from them but also information about enrolment, we invite you here: